I’ve been fascinated with the idea of native, media-specific social timelines for a good long while now. That’s why I was thrilled to see Twitter #music launch earlier this week. I love the idea of listening to radio stations made out of the posts of the people you follow. So much so, that I shipped it in the official Tumblr iOS app three years ago (and you probably had no idea.)

Story time! The feature, which was shipped on the Tumblrette codebase is now two generations old, so it’s probably safe to talk about. The feature was called Tumblr Play, and you could access it only if you knew the trick:

After that, a new, third tab would animate in. No wonder the app reviewers never found it. Here’s what it looked like: 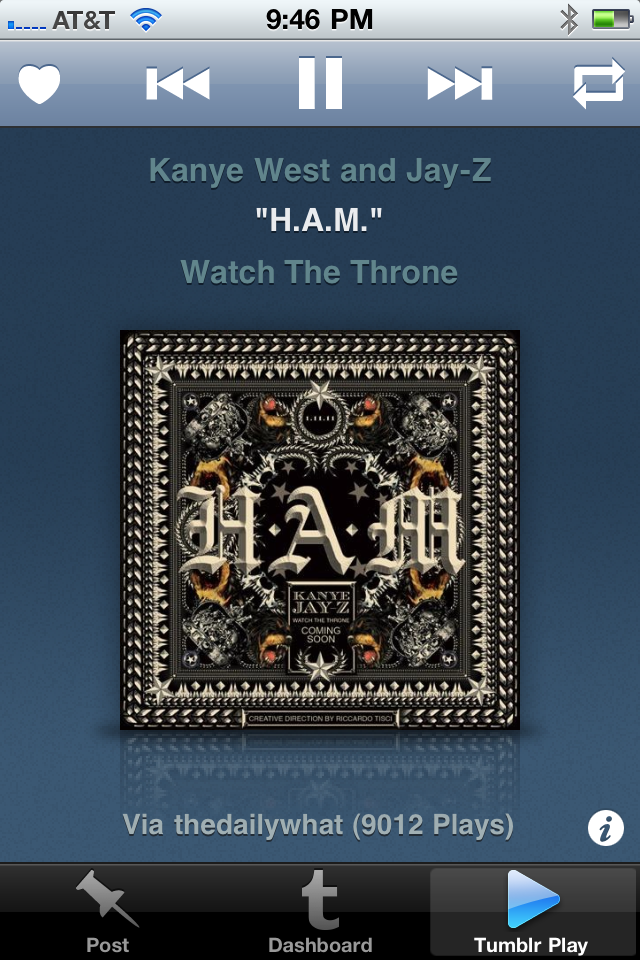 It was a fairly straight-forward implementation. I parsed and paginated the audio posts on your Dashboard and played them back sequentially and automatically. Tumblr served the audio files in an iOS-capable audio format on a private endpoint to eliminate any need to transcode (thank god.) You could swipe left or right to change tracks or use the transport controls. You could be flip over the page view and the posts were represented in a standard table (in case you wanted to see farther ahead or behind.) You could like and reblog right from the view and it ran in the background so you could use it like Pandora. All you needed was a Tumblr account. It wasn’t perfect, but I loved it. Sure, you ended up with the occasional comedy skit in between an eclectic mix of pop and indie music, but that was awesome. That was Tumblr. It was a sonic representation of your Dashboard and it kind of kicked ass.

We talked about making it public, but ultimately, I think Tumblr was worried they could be sued by a music label (or three) for running a streaming platform without a license. I kept bringing it up for the next few years, but it never went anywhere. We moved ahead designing and developing a second generation of apps soon after Tumblr Play was implemented, but for a while I had an ad-hoc radio station unknowingly created by my friends and a parlor trick to show off at parties. Maybe one day they’ll resurrect the idea if they feel that there’s some value there (as Twitter seems to.) Until then it’ll remain just another footnote in the history of Tumblr mobile. I suppose that’s pretty cool, too.